I was taking photos in the main hall of the Sulaymaniyah Museum and came across a display case containing a small clay tablet. The description beside it said the tablet was part of the Epic of Gilgamesh and a fragment of tablet V. Immediately I thought it was a ‘replica’ as the description was superficial. It did not say the tablet was genuine, that it was newly discovered or even told about the many new pieces of information it had revealed. 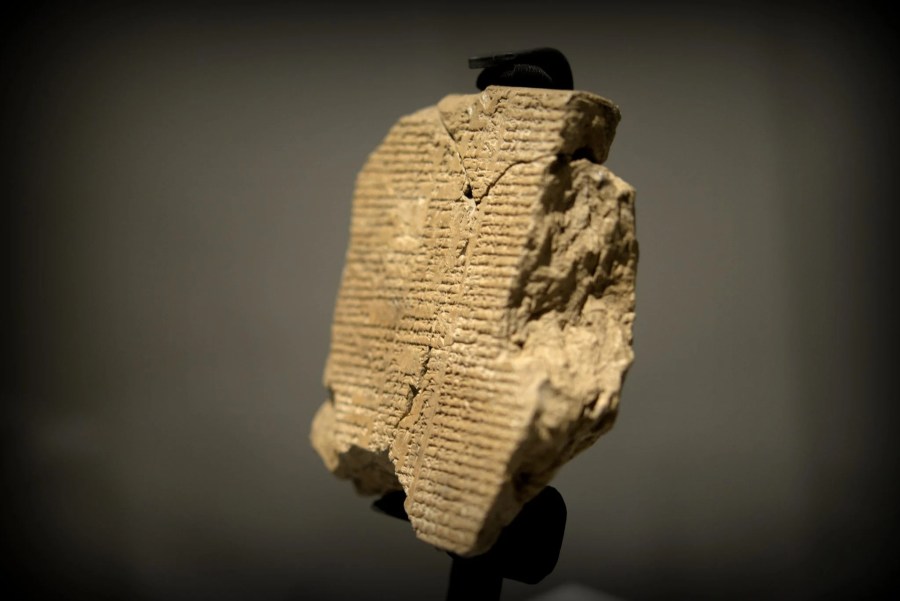 A newly discovered tablet V of the epic of Gilgamesh. The left half of the whole tablet has survived and is composed of 3 fragments. The Sulaymaniyah Museum, Iraq. Photo © Osama S.M. Amin.

After the US-led invasion of Iraq and the dramatic looting of Iraqi and other museums, the Sulaymaniyah Museum (directed by the council of ministers of Iraqi Kurdistan) started an initiative. They paid smugglers to ‘intercept’ archeological artifacts on their journey to other countries. No questions were asked about who was selling the piece or where it came from. The Sulaymaniyah Museum believed this condition kept smugglers from selling their merchandise to other buyers, as they would have otherwise done so ‘with ease and without any legal consequences.’ 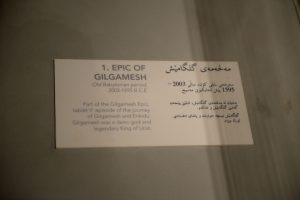 The description of the newly discovered tablet V of the Epic of Gilgamesh in English and Kurdish next to its display case. Note the description is “superficial and brief” and does not reflect the importance of this discovery! Photo © Osama S.M. Amin.

In late 2011, the Sulaymaniyah Museum acquired a collection of clay tablets: The collection was composed of 80-90 tablets of different shapes, contents and sizes. All of the tablets were, to some degree, still covered with mud. Some were completely intact, while others were fragmented. The precise location of their excavation is unknown, but it is likely that they were illegally unearthed from, what is known today as, the southern part of the Babel (Babylon) or Governorate, Iraq (Mesopotamia).

While the seller negotiated the prices, Professor Farouk Al-Rawi (of the School of Oriental and African Studies in London) rapidly examined each item in terms of its content and originality. He even found a few fakes! The seller wanted a large sum of money for the tablet of the Epic of Gilgamesh. He did not know what it represented, he only knew it was relatively large. Still, this tablet captured the attention of Professor Al-Rawi when he skimmed the cuneiform inscriptions on it. He immediately intervened and told Mr. Hashim to buy it, “just give him what he wants, I will tell you later on,” Al-Rawi said to Abdullah. The final price was $800. 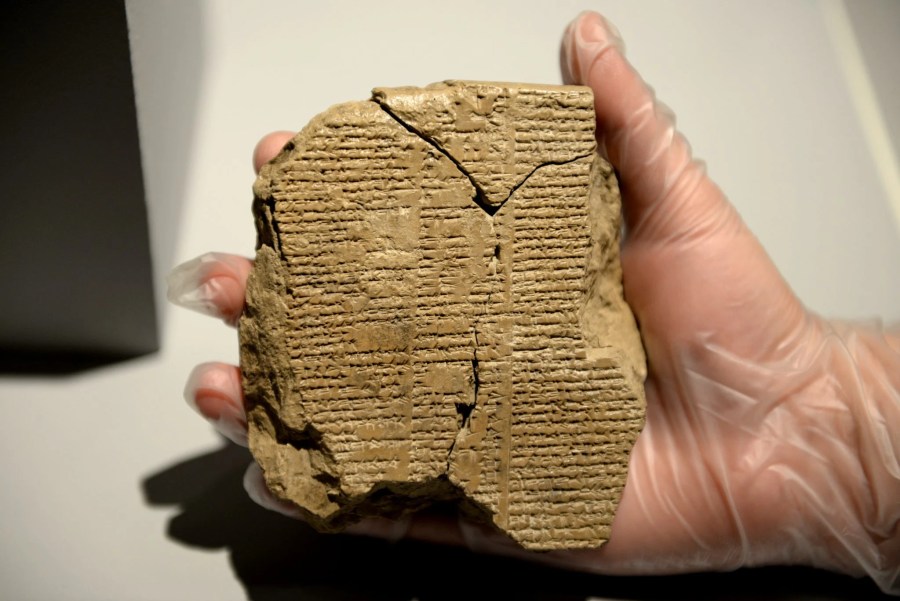 Obverse of the newly discovered tablet V of the Epic of Gilgamesh. The Sulaymaniyah Museum, Iraq. Photo © Osama S.M. Amin.

Millimeter by millimeter Professor Al-Rawi cleaned the tablet. It was composed of 3 fragments and amazingly the fragments were already joined together… by whom, the excavators or the smugglers? We’ll never know.

Soon enough Al-Rawi realized that this tablet was one of the tablets of the Epic of Gilgamesh. He informed his colleague Professor Andrew R. George about this discovery and with the help of Mrs. Hero Talabani (wife of the former Iraqi president Mr. Jalal Talabani) Professor George received a funded visit to the Sulaymaniyah Museum. Professors Al-Rawi and George resided in a guest house belonging to the General Directorate of the Antiquities of Sulaymaniyah. 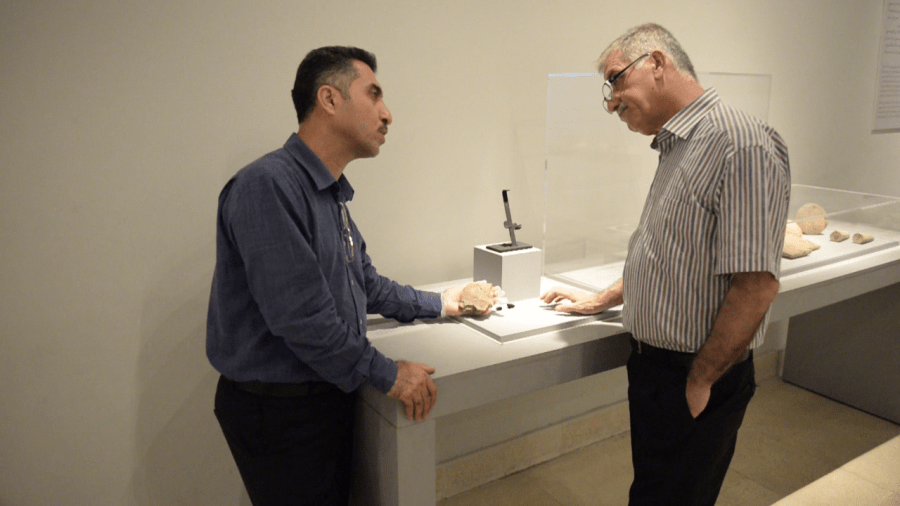 In November 2012, work started on reading and translating the cuneiform texts; it took five days. Al-Rawi also drew sketches of both the tablet’s obverse and reverse sides. According to Al-Rawi and George, the new tablet is inscribed in Neo-Babylonian cuneiform language and represents the left half of the sixth tablet column. The tablet can be found at number T.1447 in the Sulaymaniyah Museum. It is 11 cm in height, 9.5 cm in width, and 3 cm in thickness.

The museum’s description beside the tablet said that it dates back to the old-Babylonian period (2003-1595 BCE).While Al-Rawi and George’s article hints it was inscribed by a neo-Babylonian writer (626-539 BCE).

The new T.1447 tablet, according to the article Back to the Cedar Forest: The beginning and end of Tablet V of the Standard Babylonian Epic of Gilgameš published in June, 2014 is:

I believe it is important to draw attention to this tablet because of it’s significance and it is my pleasure to tell you all about it!

I am a consultant neurologist not an archeologist so many thanks goes to Mr. Kamal Rashid, (director of the General Directorate of Antiquities of Sulaymaniyah) Mr. Hashim Hama Abdullah, (director of the Sulaymaniyah Museum) and Miss Hazha Jalal, (manager of the tablets’ section of the Museum) for their kind help and unlimited cooperation. 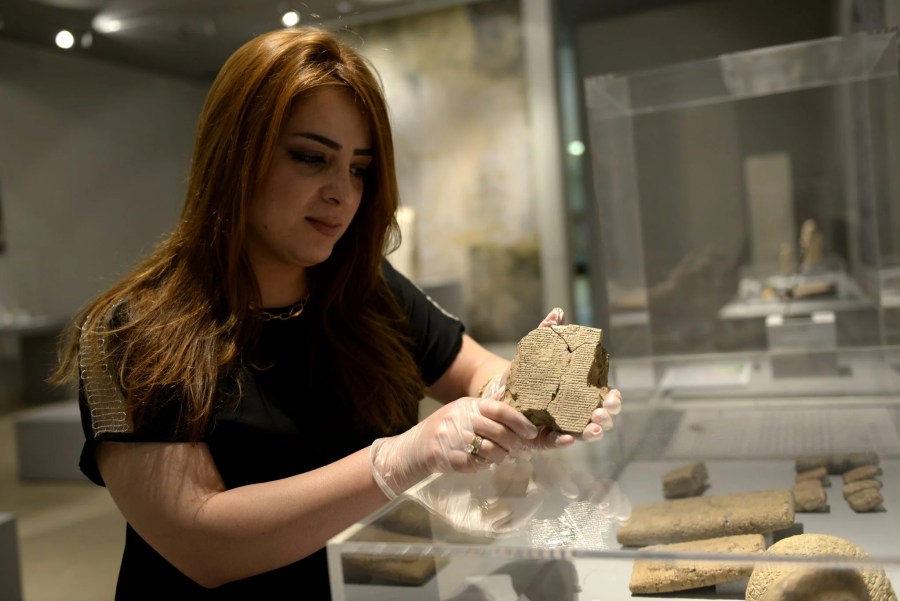 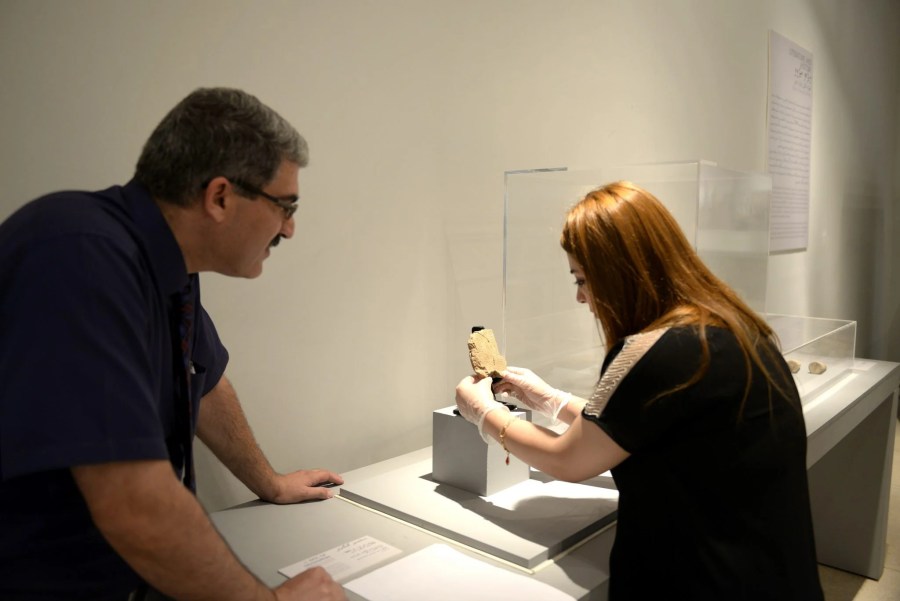 Miss Hazha Jalal, (manager of the tablet’s section at the Sulaymaniyah Museum of Iraqi Kurdistan) speaks (using Kurdish language) about this tablet: “The tablet dates back to the Neo-Bablyonian period. It is a part of tablet V of the Epic. It was acquired by the Museum in the year 2011 and Dr. Farouk Al-Raw transliterated it. It was written as a poem and this version has added many new things, for example Gilgamesh and his friend met a monkey. We are honored to house this tablet and anyone can visit the Museum during its opening hours from 8:30 AM to 2:00 PM. The entry is free for you and your guests. Thank you.”

ProcessMaker will invest in its digital process automation platform and build out community banking, higher education, and manufacturing. Source: After 20 years of bootstrapping, Durham-based ProcessMaker raises $45M to scale – Hypepotamus

Here’s Everything Coming to Disney+ in January 2021, Including the ‘WandaVision’ Premiere | Cord Cutters News

“Here’s Everything Coming to Disney+ in January 2021, Including the ‘WandaVision’ Premiere | Cord Cutters News” https://www.cordcuttersnews.com/heres-everything-coming-to-disney-in-january-2021-including-the-wandavision-premiere/